For my full recipe see My Main Site

This site shows photos taken as I got used to using the DLX 2000 Mixer.  At first there were major problems, but as I got used to it, it got better and easier. At the bottom are the better ones. But mostly this is a log of failed experiments.

This is batch 2 from the DLX after aging for 2 days. This dough started with the roller and moved to the dough hook. This dough took over an hour of struggle with the DLX.  Also, I had a cheese problem which is why it looks yellow. The cheese basically melted into ricotta cheese, which is what happens when mozzarella is not properly formed. The vendor (whole foods) is very inconsistent.  This dough pizza looks ok, but in reality the crust is too dense. 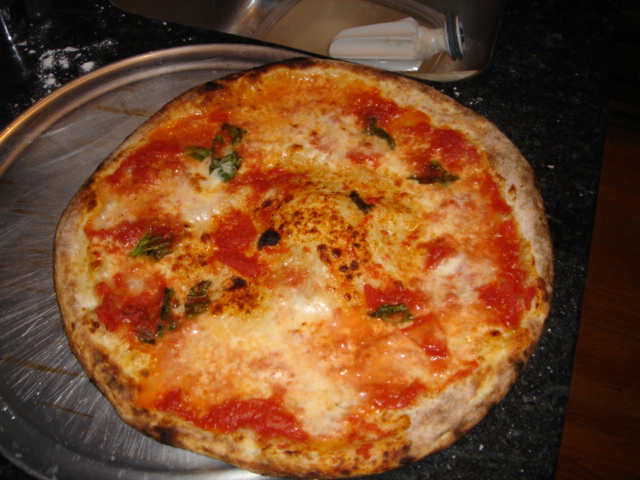 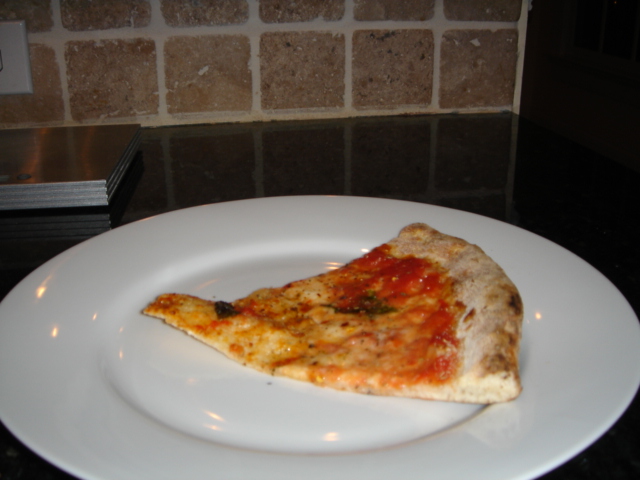 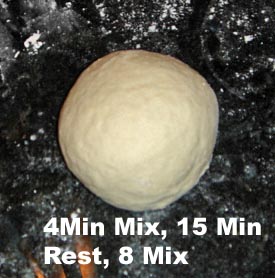 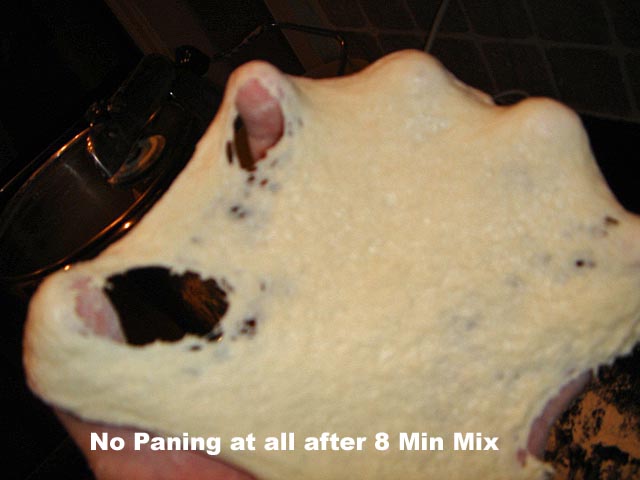 After about 20 min of mixing. Not looking smooth at all. 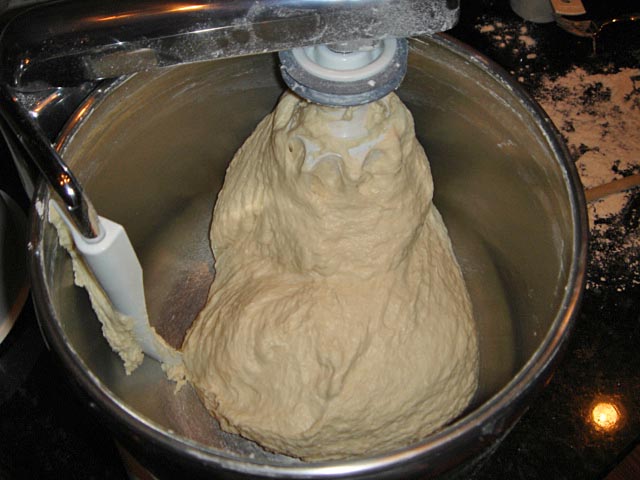 After about an hour (40 mixing, 20 resting intermitently) the dough looked like this and I gave up. However, 90 minutes later, after resting, it looked much better than this. I spread a ball out and it was smooth and windowpaning well. But it had no blisters. I should have taken a photo of the windowpaning, which was excellent. 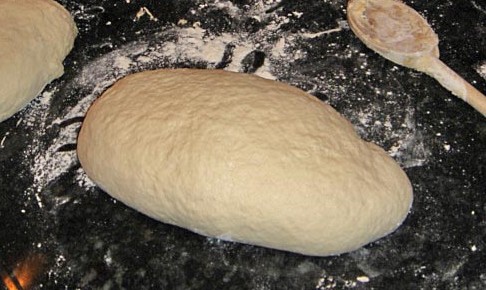 I baked some of it into bread, just because I had so much. I've only made bread twice before so I'm no expert. I think you can see the dough has smoothed itself out somehow. This is about 2 hours after kneading.  No punch down. I just formed into a ball right after kneading an put it right on the stone to rise. I used a cold start oven. 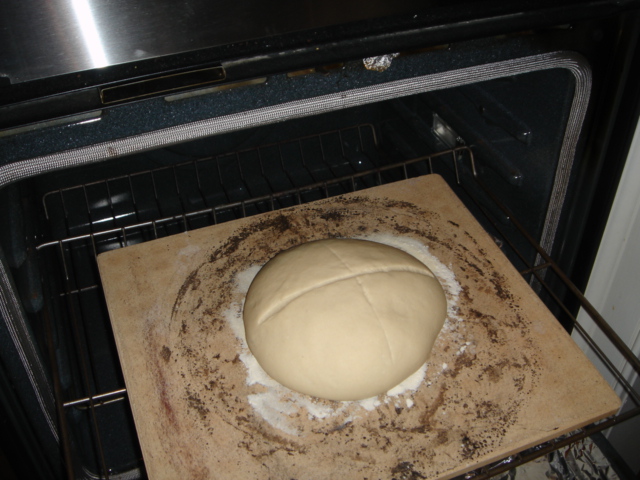 It was a little dense, but I'm sure it was how I baked it and not in the dough itself. It got stuck to the stone and when I forced it off the stone it shrunk, But overall it wasn't too bad 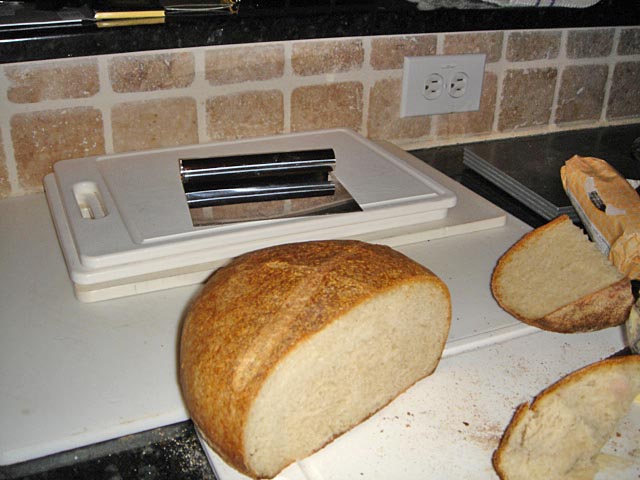 Next round of pizza. Batch 3. The dough seems odd. It had its pluses and minuses.

It spread very, very, very easily. It was soft and buttery. I didn't have to pull it.  Just holding it caused it to spread. It spread wider than most doughs of the same size  (300g), and could have easily gone even wider.  But it was not smooth and bubbly. It had no tears, but it got tiny holes in it as you can see 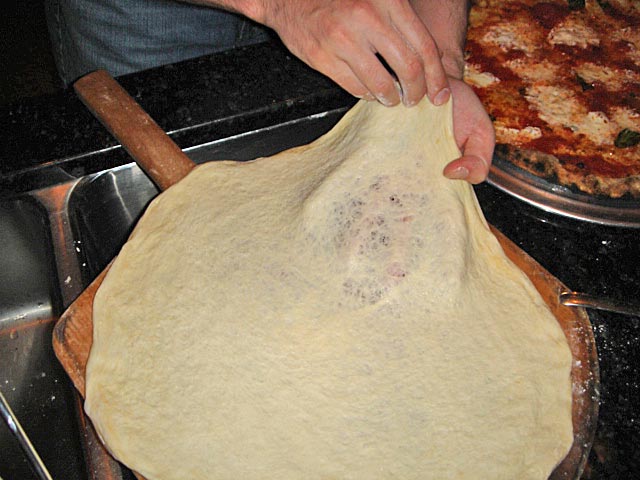 Ready for the oven. Toppings are sparse and balanced. 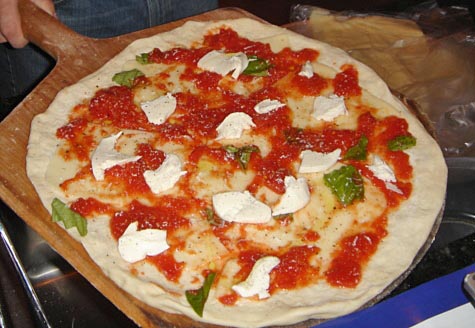 2 minutes and 20 seconds later at 800F. Notice that this cheese held up better to the heat than Batch 2, but still broke down slightly.  There are paper thin slices of dry cheese under the sauce too. You can just barely see it above. This keeps the dough from getting soggy. Straining the tomatoes helps too. 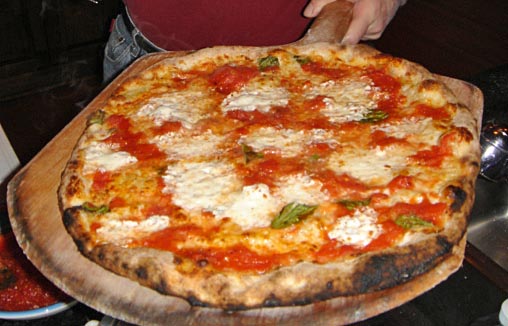 This is what a pizza is SUPPOSED to look like on the bottom.

The next dough (from the same batch) had no holes. 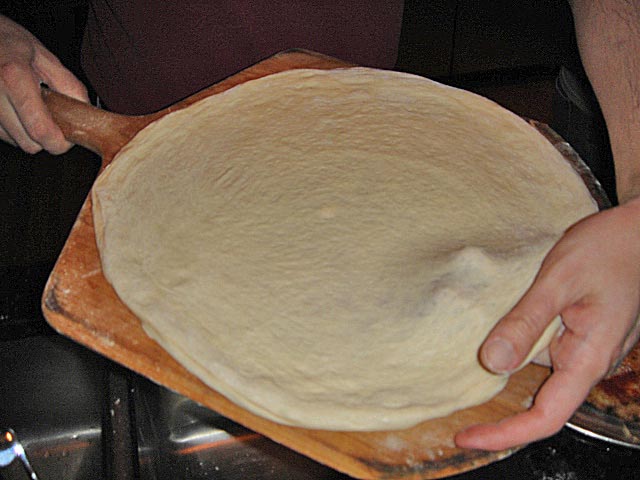 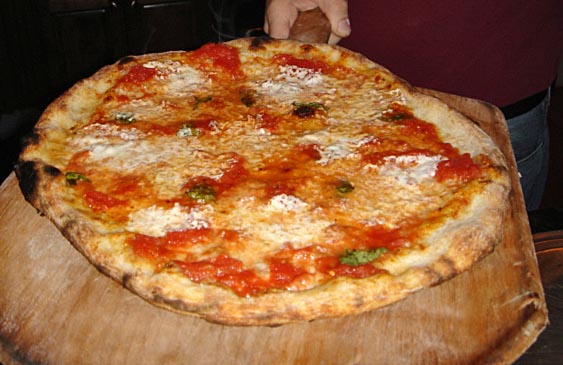 I'm not sure if you can tell from this photo, but this crust is much lighter than batch 2's,  This is a better pie 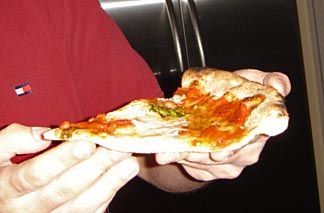 I'm still not quite there yet, but I see some promise and I'm going to stick with it.

This was by FAR the easiest to make. I started with a wetter dough and let it work for a few minutes as a softer dough, and then gradually added more flour to harden it up. By the time it got so hard that it was sticking to the roller and just spinning around, it was pretty much done. I had it in there for about 10 minutes then took a 5 min rest then went another 5, which is still longer than everyone says, but much less than I normally do. The windowpaning was excellent, much, much better than batch 3. I didn't take a photo, unfortunately.  You can't really tell from just looking (even in person), but this crust is much lighter than the other pies.   This pie took just 2 minutes 10 seconds to cook at about 825F 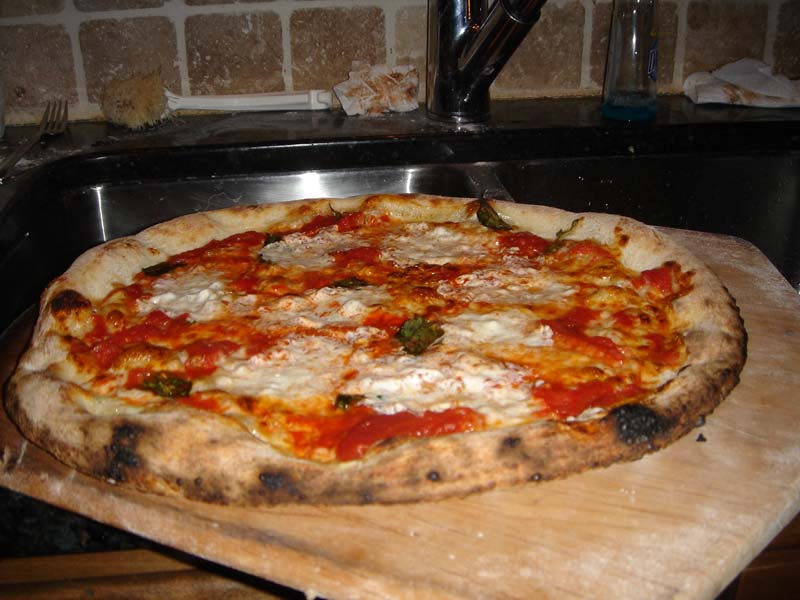 This was an excellent batch. Possibly the best pizza I've ever made. If you compare these photos with earlier batches, I think you can see the difference. Of course, it's not the same as it is in person, but the difference in the final product is dramatic. 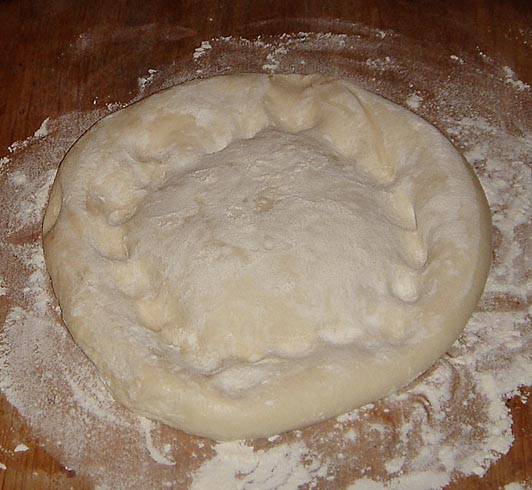 Pretty good windowpaning, yet there is still a lack of smoothness. There are striations through the dough. I'm not sure what that is about. But the final pie didn't seem to be affected. The dough spread like butter.  Interestingly, this dough could never be spun or handled roughly because it would come apart. This dough is very very soft even though I'm using a good bread flour.  It feels more like experimental batches I made using softer flours.  I know that Sally's in New Haven spreads like this, but Patsy's in Harlem (my model) spreads differently. They are firmer and highly elastic.  Hmmm... 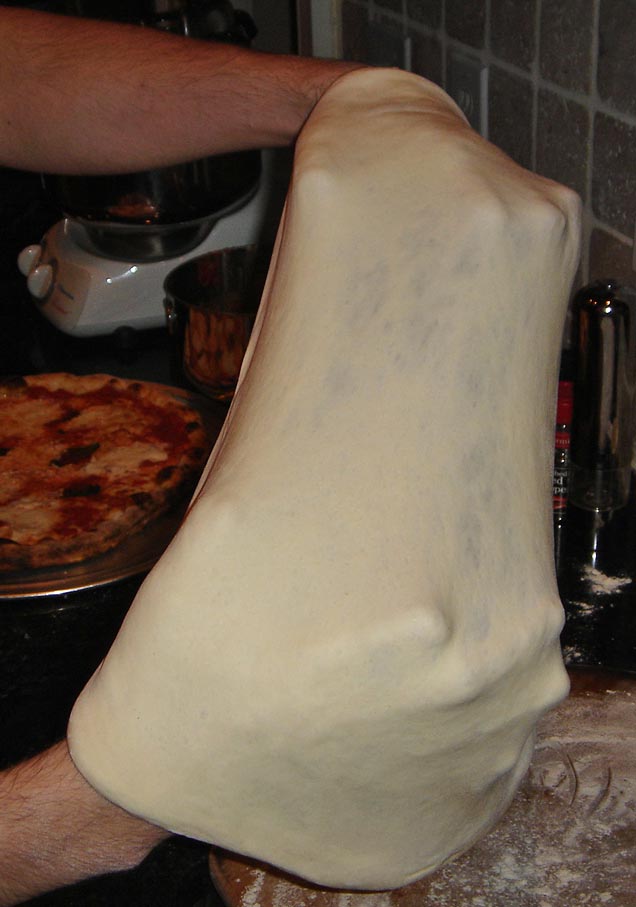 There was some blistering, even after spreading.  A good sign 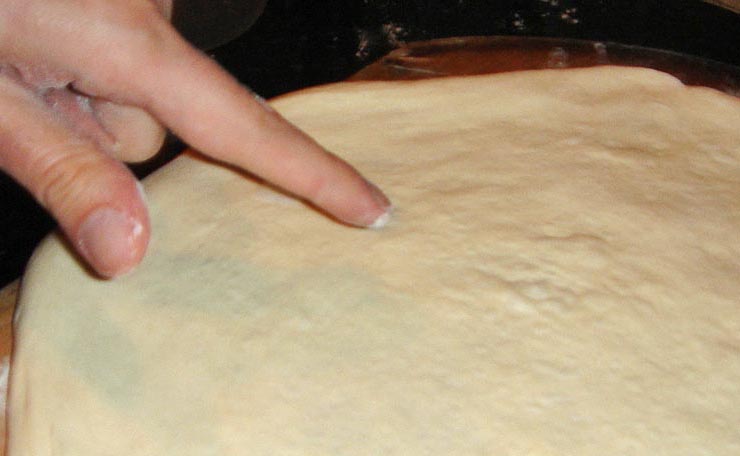 Here you can see how I layered the dry sliced mozzarella under the sauce, and then the fresh mozzarella on top 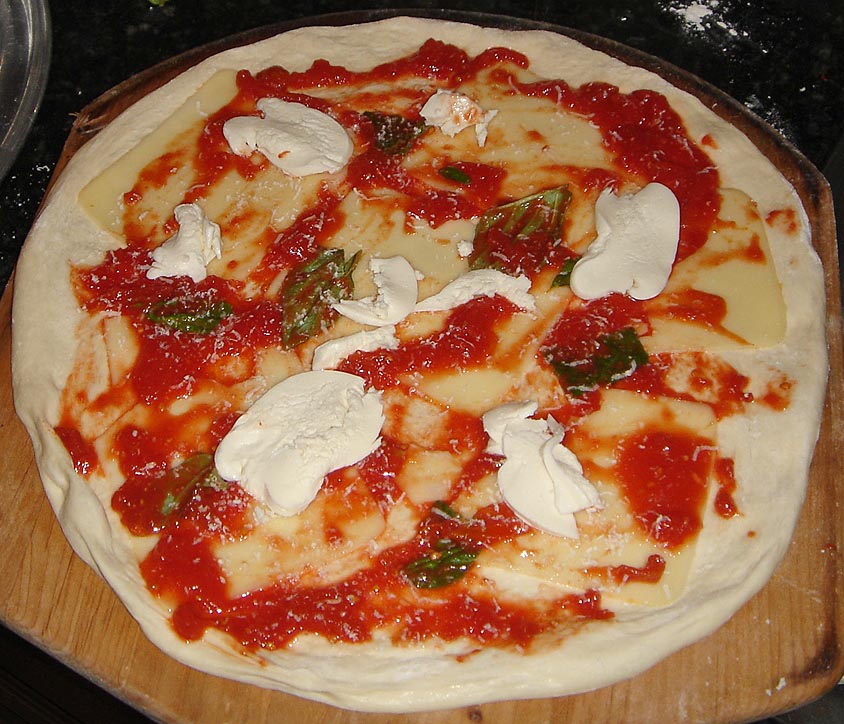 The Pie. You can see how the cheese melted and broke down a bit. Not great. but after it cooled down, the cheese gelled together again somewhat.  I need a better cheese supplier 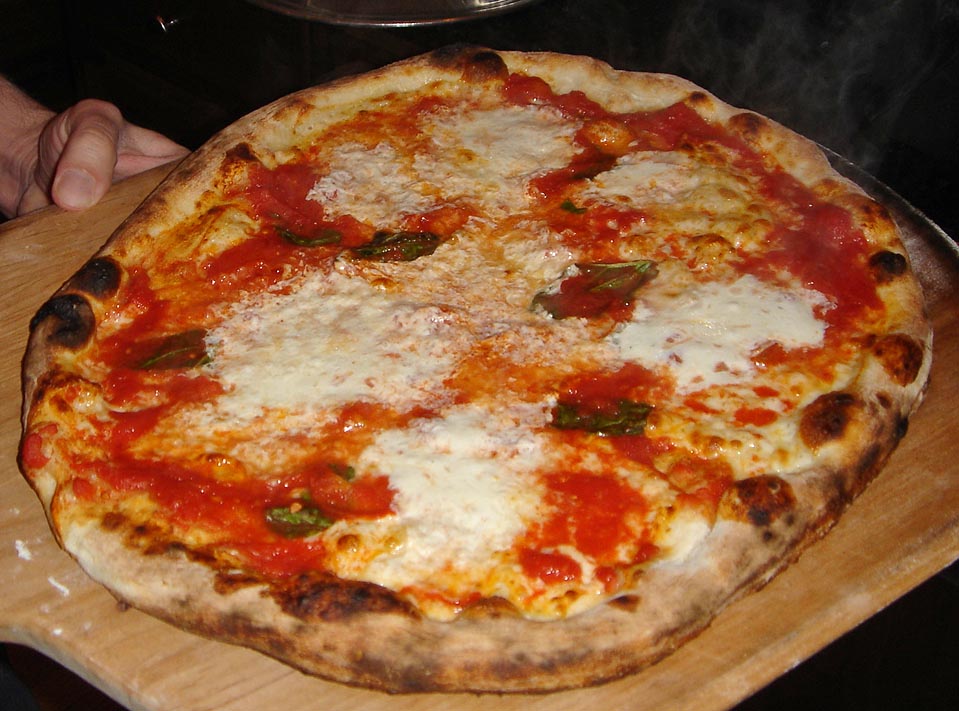 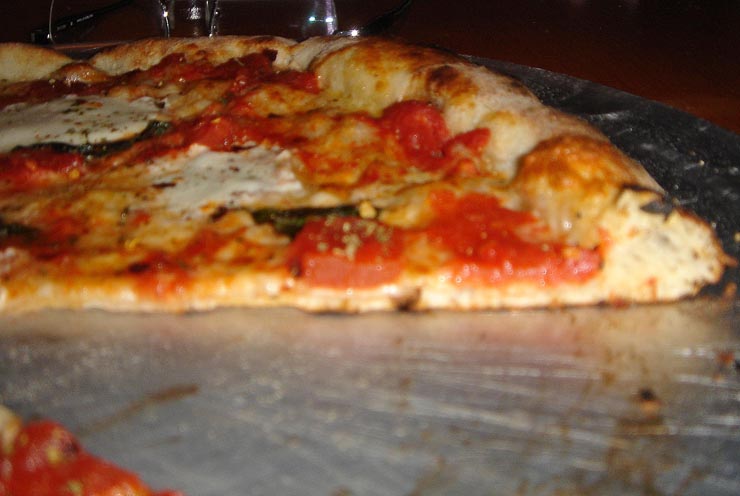 You can't tell here in the photo, but when I push down on the dough, it springs right back Very, very good 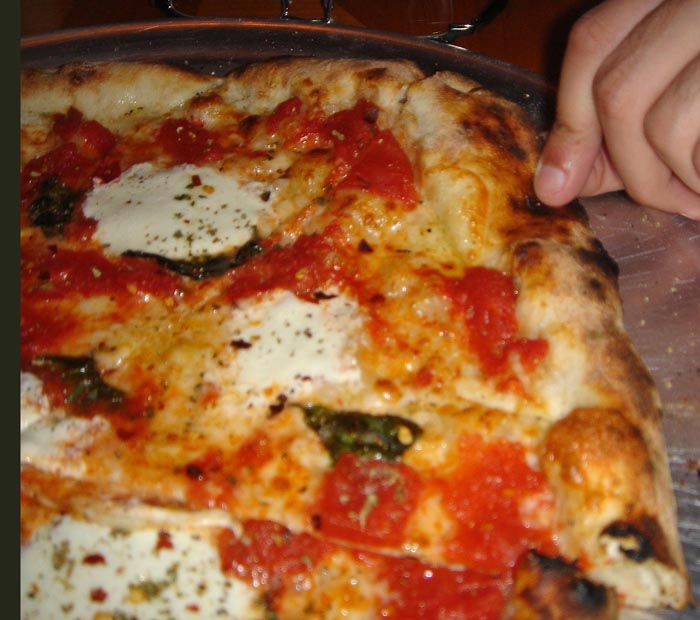 Overall This pie was a 9. My best ever. I am getting very, very close.  Last night I made batch 6 which was 7 doughs (about 2000g). I'm making another 7 doughs today because I have a party with 25 people coming and I'm making 14 or 15 pies. The process was very easy. I probably could have made it all in 1 batch in the DLX, but I didn't want to chance making a big change since I'm still new at this and I want everything to be right for the party.

This was a really great batch, just like 5. I made 14 pizzas. That's 4000g of dough which I made in 2 batches.  This was the most I'd ever made. But it all came out great. The dough was butter soft, almost slack.  It didn't really rise that much and as it sat in the fridge for 2 days it kind of sunk down and flattened out.  I was a little worried. But it did puff up a little bit when I finally took it out to rise. Not much though. This dough was probably the wettest I've made since getting the DLX.  I started with a wet, battery mix and added flour gradually. But in the end, I may not have added as much as I usually do, because it was very, very soft, even as I formed it into balls. So, like I said, as I saw it flatten out a bit in the fridge I was a little nervous.

However, the final pizza was outstanding. The dough spread easily.  It was fairly well window paned and even blistered in the center. It felt like a baby's bottom. I had some of the girls feel the dough. This was some sexy dough, LOL...

The final crust puffed up nicely. It was light as a feather. It sprung back when pressed down. My friends who've tried my pizza before said this was much better than my others (using Kitchen Aid Mixer) by quite a margin. Many people said this was the best pizza they'd ever tasted. I have some friends visiting me from Sweden and in the last two days they kept goading me into a political debate, but I just wouldn't bite.  I just didn't react, even though we are on opposite sides of the spectrum. Then a few hours before the party Johan made the mistake of saying, "Hey it's pizza, it's not rocket science" and I jumped - on this I reacted. This was personal!  This IS rocket science, dammit. I've been working on this for 6 years.  I'm a damn great engineer and this is as hard as any of the patents I've worked on., LOL... Then when he tasted the pizza he came over apologized and said he sees that this is science. He said it was the best pizza he's had and he had like 9 slices, tasting every combo I made.

I don't have a tremendous amount to add because the pizza looked just like the last one, so I'll just show a photo of myself with my friends: 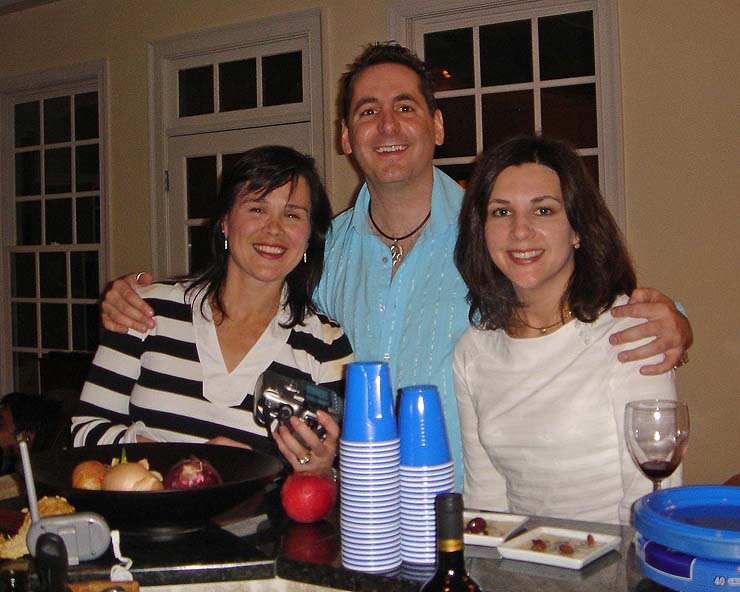 I made a few others like mushroom, truffle, parmesan and regular cheese with mushrooms.  I also folded 2 over into calzones. This one was pepperoni, sun-dried tomato, chopped fresh tomato (strained well), mozzarella and rosemary. This is an excellent combo for a calzone or rolled strombolli. 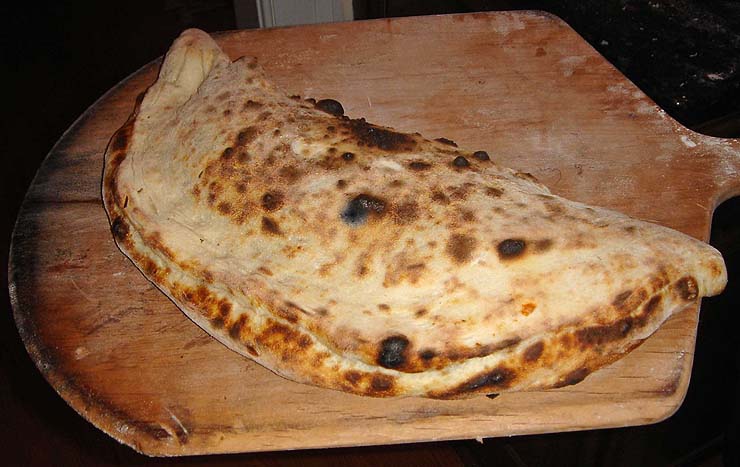 Check out the steam rising. When I took it out of the oven there was a little gap in the end of the dough and steam was just pouring out like a volcano.  It was cool. 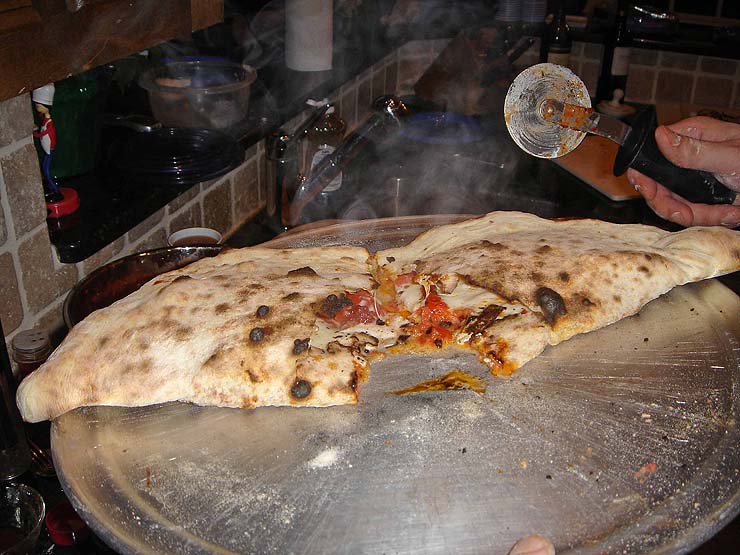 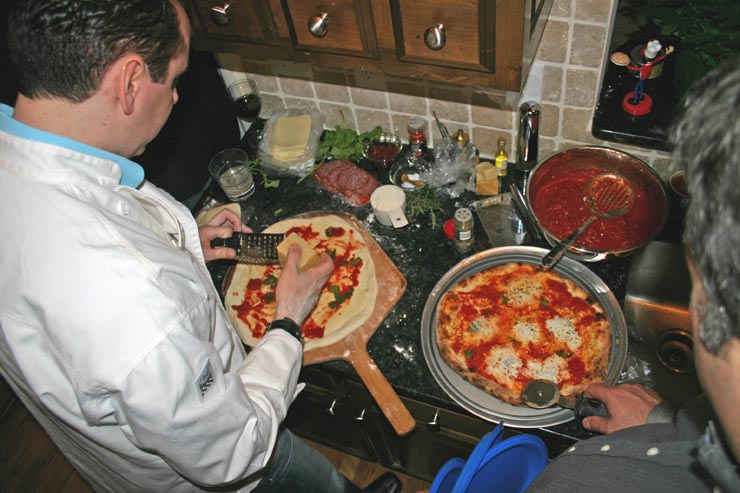 This dough is too soft to really spin, but the crowd demanded some entertainment, so I had to show off a bit 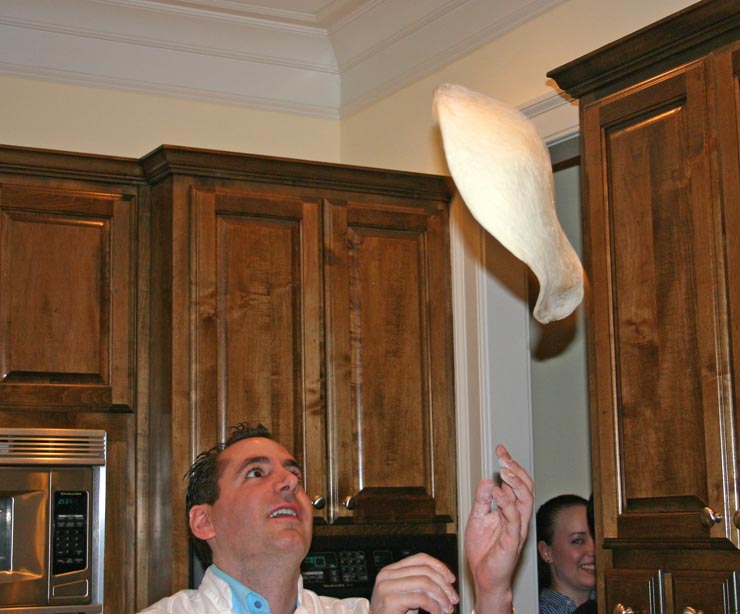 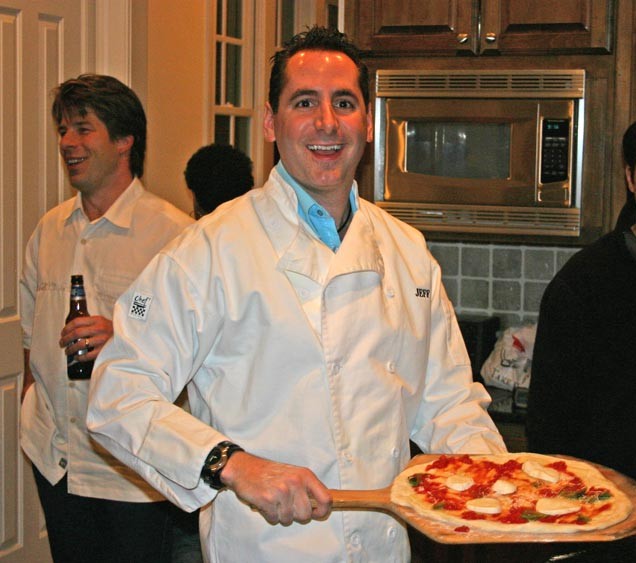